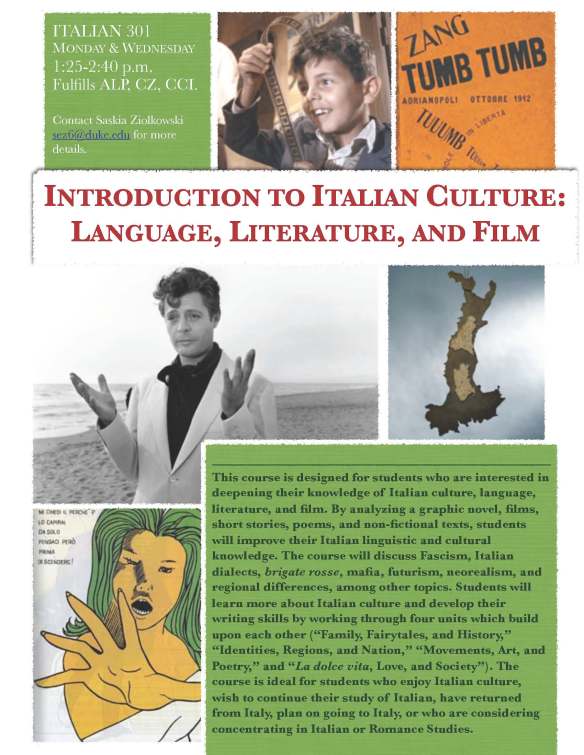 The question of the modern Italian novel remains an open debate, with a shifting canon of whose works are considered essential reading. We will start by reading the novels of four writers frequently considered the most important twentieth-century Italian novelists, Luigi Pirandello, Italo Svevo, Carlo Emilio Gadda, and Italo Calvino. While there is also number of men writers whose novels could be added to the list (for instance, Bassani, Passolini, Bontempelli, Pavese, Tabucchi, D’Annunzio, and Lampedusa), there is a similarly long list of women writers and the remainder of the course will consider these authors and the novel, including the issue of labeling them “women writers.” Continuing our investigations of genre, canon, twentieth-century movements, Italian history, and regional differences, we will read novels by Elsa Morante, Natalia Ginzburg, Grazia Deledda, Sibilla Aleramo, Dacia Mariani, Oriana Fallaci, and the debated case of Elena Ferrante. How do these works change the critical idea of the Italian novel? Is the relationship between Italian women writers and literary movements different from that between Italian men writers and movements? What categories are productive when discussing the Italian novel in the twentieth-century? What does it mean to discuss gender and the genre of the novel in an Italian context? 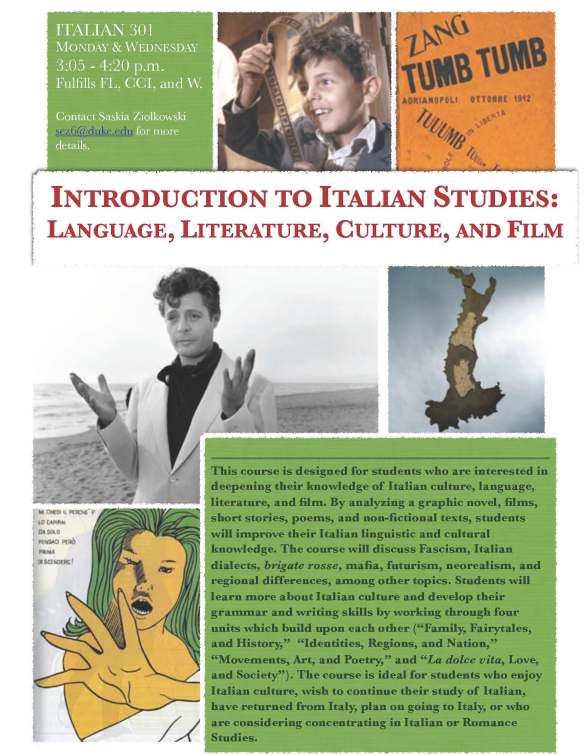 This graduate course (independent study) will look at a range of the diverse and important Italian literary works and films produced in the seventies. The students will discuss how the works react to earlier movements, as well as how the works respond to the events of this tumultuous decade. We will discuss, among other issues, problems of periodization, memory culture, historical engagement in film and literature, the exploration of Fascism and the Holocaust, and issues of gender. We will read works by Morante, Fo, Fallaci, Ginzburg, Sciascia, Tabucchi, Primo Levi, Calvino, Manganelli, Sgorlon, and Ortese, as well as cover films by Rosi, Petri, Antonioni, Pasolini, Bertolucci, Fellini, Cavani, and Wertmüller. 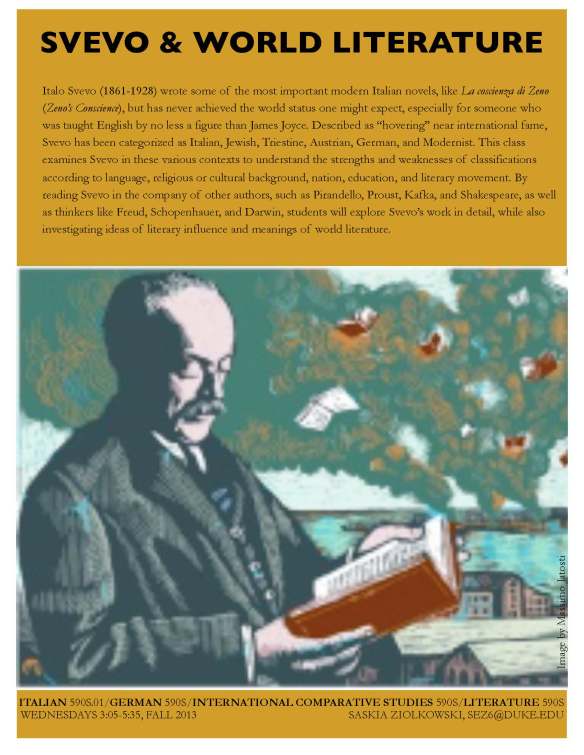 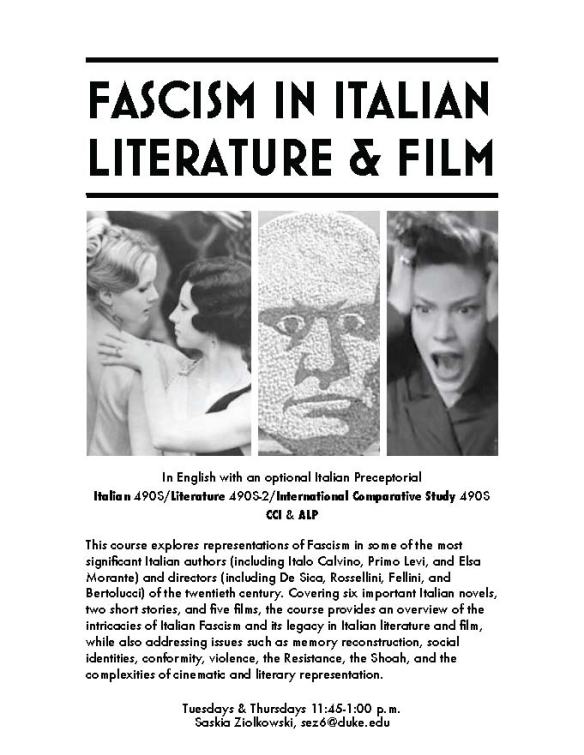 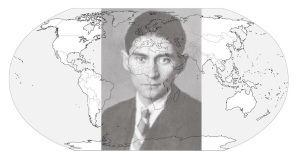 “Kafka and World Literature” explores ongoing debates about what world literature means through the lens of Kafka, who has played a significant role in them: David Damrosch’s What is World Literature? and Pascale Casanova’s The World Republic of Letters and both feature Kafka. From the earlier works that Kafka re-imagined, including the Odyssey, Don Quixote, and David Copperfield, to works that in some way react to or adapt Kafka’s work, “Kafka and World Literature,” will examine the ideas of world literature, literary traditions, and influence. Using different genres and media, such as film (Federico Fellini’s Intervista) and graphic novels (Art Spiegelman’s Maus) and authors from Europe (Robbe-Grillet, Svevo, and Gogol), North America (Philip Roth), South America (Borges, Márquez, and Lispector), and Asia (Kobo Abe) the course covers a wide range of works which will aid the class in our discussion of world literature and Kafka’s work itself. Students will work to develop their own understanding of Kafka’s narrative modes, while engaging a range of other literary works which have been described as Kafkaesque. This course invites students both to compare texts as well as to question what is lost and gained when comparing works across time periods, languages, and genres. Teaching at the University of California at Berkeley, Spring 2012 (Comparative Literature 155 and Italian Studies 117).

Many of the most important twentieth-century Italian authors are Jewish or part Jewish, including Italo Svevo, Giorgio Bassani, Umberto Saba, Elsa Morante, Natalia Ginzburg, Alberto Moravia, and Primo Levi. This class will cover a selection of these authors’ writings (and others) as well as address what the phrase “Jewish Italian Authors” means (or could mean). Topics will include humor, love, and the difficulty of representing the Shoah, among others. We will examine the impact of these authors’ Jewishness on their works, as well as the problems of discussing whether these authors’ religious and ethnic background influences their writing. In addition, the course will explore the effect important historical events had on these authors and their works. While covering some canonical works of twentieth-century Italian literature, the course will also provide a unique perspective on modern Italian literature. Teaching at the University of California at Berkeley, Fall 2011.

This course explored the extraordinary literary communities of two northern Italian cities: Turin and Trieste. We discussed the idea of regional (as opposed to national) literature, the role place has on literary inspiration, and the importance of authorial friendships (and rivalries), while examining some of the most significant Italian authors of the twentieth century. The first capital of Italy, Turin boasts the publishing house Einaudi and a centuries-old university that numerous noted authors attended. Carlo Levi, Natalia Ginzburg, Primo Levi, and Cesare Pavese, among others, spent significant portions of their lives there. Trieste, meanwhile, was not allowed to have an Italian university by its Austro-Hungarian government and was not continuously part of Italy until after 1954. Despite its apparent distance from mainstream Italian culture, Umberto Saba asserted that Trieste had given Italy her best novelist (Svevo), most luminous young narrator (Quarantotti Gambini), and best poet (by which he humbly meant himself). By comparing the literature of these two very different northern cities, this course offered a unique perspective on modern Italian literature. Taught (in Italian) at the University of California at Berkeley, Spring 2011.