“Venice never quite seems real, but rather an ornate film set suspended on the water.” Words articulated by Italian fashion designer Frida Giannini impeccably delineate my thoughts as I experienced Venice. Captivated by the people, beautiful architecture, and water, the city of Venice constantly had me searching for a person to pinch me to end this whimsical dream. However, the city was in fact reality and so too the events that marked its troubling history. 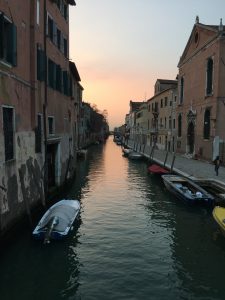 Picture taken at the end of our tour on 3/14 of this dream-like city.

To begin the tour, our spunky and humorous guide informed my classmates, Professor, and me of Venice’s history that is often unknown to many. She informed us that Venice possessed Eastern and Northern Europeans brought to the city. Along with others, these people were sold for manpower needed for slavery in Muslim worlds. Similarly, our guide explained how Venice was home to Muslims from Persia, Bosnia, Albania, etc. Thus, Arab influence permeated and continues to do so throughout the city. After recounting this history of Venice that I had no prior knowledge of, our tour guide explained the “good” that came out of this muddled past. She said, “The presence and mixing of these many different people shows how ‘contamination’ could be a good thing. I am proud of how mixed my blood is. If someone were to check my blood, it would not be made up of just one thing.” The beauty in this statement and its reality made me reflect upon my initial impression of Venice after told about its dark history with slavery. Although disappointing, this history demonstrated a fact that most people debase today. This fact is the brilliance, not degradation, of different peoples of different lands coming together to influence one another. Many people, especially Americans, extract disgust from people who “mix” with people from other races, and to see our guide’s pride from being of a mixed heritage was something I was not expecting from a city that is seemingly homogenous at first glance. 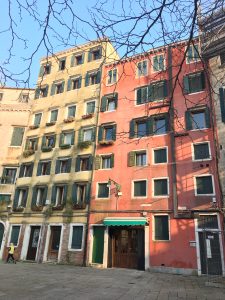 The plaza, with a rich history, where we began our tour.

Moreover, my classmates and I envisaged how the presence of these different and diverse influencing forces still hold today in Venice as we visited a Kosher bakery and restaurant. 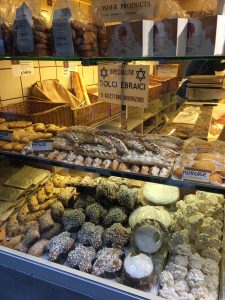 While visiting this Kosher bakery, I discovered something beautifully shocking that bolsters the claim of Venice’s multifaceted nature. Not only is this Jewish and Kosher bakery run by Christian owners, its foods have Middle Eastern and German influences. In addition, we also visited a restaurant of a Jewish nature. 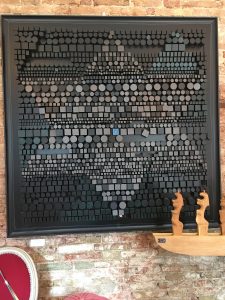 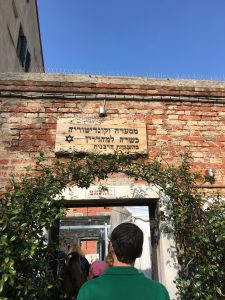 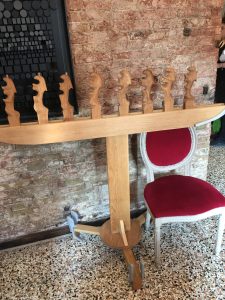 This restaurant continued to challenge everything I thought I knew about Venice. While sitting in this establishment, and basking in its glory, I was in awe of the heavy Jewish influences I saw all around the room. From the Hebrew inscriptions, to the Star of David, and to a beautifully creative Menorah. Before, I believed Venice to be a city of Italians and Italian people, music, and foods only. However, after eating in this establishment, I began to reflect upon the importance of influences in this city that are not only Italian. Or what my conception of “Italian” was before. The bakery and the restaurant were one of my absolute favorite parts of the tours. In Venice, Jewish Italians were executed and sent to concentration camps for the presence of their “differences” and them not being only Italian or whatever “Italian” is said to look like. However, these two places, the bakery and the restaurant, show a juxtaposing side of differences. It shows a more positive light and how the presence of diverse forces can influence things in a way that enriches it, not in a way that leads to persecution.

Furthermore, as the tour progressed, I finally got to experience my main motivation for taking this course and embarking on this trip: the Italian Jewry and understanding the treatment of Italian Jews. During the tour, we came across two large buildings facing each other. I will delineate the first one, the white building pictured below. 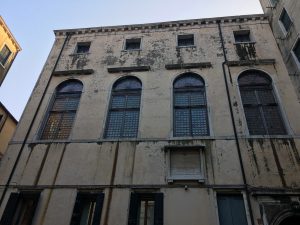 While showing us this building, the tour guide relayed the information of the harrowing history of Jewish Italians. 246 Venetians and 8,000 people from Italy in total were killed during the Holocaust, or “Shoah” (meaning “Catastrophe”). In 1938, the guide told us that people of Jewish backgrounds were harassed by the racial laws in all aspects of their lives. They could not go to schools, shops, beaches, or even work to provide for their families. While describing this history, a history similar to that of my ancestors, our tour guide declared, “My friend’s father, {who at eight-years-old at the time}, was told that he was an enemy of the state.” An eight-year-old? An enemy? Shocked, disturbed, and moved, these words will forever stick with me. Although exploring Italy was and is the best thing to have ever happened to me, it is the knowledge, lessons, and experiences that I gained during this trip and especially this tour that will stick with me for a lifetime. How can innocent people, or even mere children, be seen as enemies? This tour remarkably bolstered my understanding of the Italian Jewry, and irrevocably changed what I thought I knew of Venice and those who previously inhabited it. What is to following may be even more astounding. 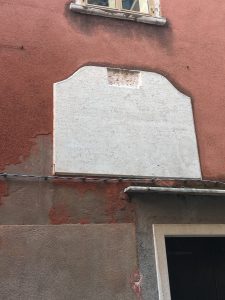 Pictured above is the building right across the white building I described above. This building, and our tour guide’s explanation of it, also contributed to knowledge that has helped remarkably transform my prior knowledge and thoughts on Venice. Moreover, the tour guide informed us that Venice attracted various foreign communities, such as Greeks, due to its commodities that helped foster “brotherhood”. These commodities existed as “le scuole” given to foreign communities that arrived in Venice. Thus, for the Jewish, the scuola existed not as a school but as a synagogue. This synagogue functioned as a community that provided social assistance/healthcare, education, social, and religious. Although inspiring that this city helped create a sense of community for foreigners, the juxtaposition between this building and the white one shows a truth about this city’s history that cannot be covered by “le scuole”. These buildings, right across from each other symbolize how in 1920, “Jews were seen as heroes” (red building above), but soon after in 1938, “Jews were seen as enemies of the state” (white building).

Similarly, my absolute favorite elements of the trips were the elements of commemoration of the lives lost placed in Venice (pictured below). 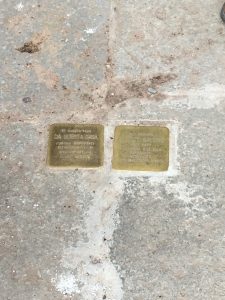 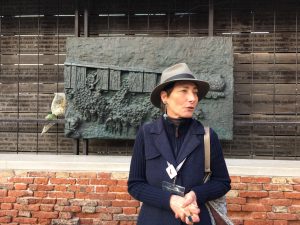 The first image shows two of the 55,000 “stepping stones” in Europe created to provide recognition for all people who lost their life to the Shoah and to ensure that people never forget what happened. The second image is a portrait created by Lithuanian-Jewish artist Arbit Blatas in 1989. The portrait, behind our tour guide in this picture, shows a train that brought people to the concentration camps. In the artwork, one can see limping elderly, men, women, and children all marching with their luggage “hoping it’ll mean something”. The piece also features the names of the 256 people and the dates of their deaths. Similar to the stepping stones, this artwork is to foster the necessary remembrance of these victims.

In addition, what struck me even more than the beauty of this portrait is a question our tour guide posed to all of us. She asked, “Is it appropriate to place this artwork of the Shoah in a place that used to be a ghetto?” When she asked this question, a question I had not thought of before, I reflected on it for the remainder of the trip. As I went back and forth, I finally came to an answer: not only is the placement of this artwork appropriate, it is obligatory. Regardless of it being in the past, all people, not just Venetians, must be reminded of what happened and the prejudice that continues to happen in this world that led to the theft of innocent lives.

In conclusion, this day, the tour, and the knowledge of the tour guide monumentally contributed to my understanding of the Italian Jewry and the Italians persecuted for their “differences”. The most surprising and significant things I learned today is discussed in the above paragraphs. Before entering Venice, I never thought I would learn that this seemingly homogenous city contains so many Arab influences. As an Arabic-speaker and person interested in the Middle East, this was one of my favorite elements of the trip as I grasped how proud our tour guide was of her city’s multiple influences and her “mixed-blood”. Also, this day grandiosely added to my understanding of Venice, its history, and its Jewish authors. Marred by such carnage and death, this city does not attempt to disregard and cast off its ghastly past, but instead upholds it for us all to remember what occurred to Jews of Venice, Italy, and in other countries. This idea connects specifically to the artwork above, which is the specific site element or object that added to my perspective.

In tandem, this day intrinsically tied to our readings, especially “La Storia”. Due to this day, and supported by prior preparation and teaching of Professor Ziolkowski, I was more equipped to answer the various questions I came into this class with. Such as: What does Jewish Italian or Italian Jewish mean? What does it mean in terms of culture and identity? What does Jewish Italian literature mean and include? How does literature relate to cultural, religious, national, and personal identity? What role has Italy played in Jewish history and Jews in Italian history? All of these questions were answered throughout this trip, but especially on this day, which has helped me understand a fuller picture of what Venice and Jewish Italy is all about. Although its history is saddening, I am happy it remains evident all throughout this city of dreams to remind us that although we are far from these tragic events, we must always ensure we never regress to a world where these events can occur again. 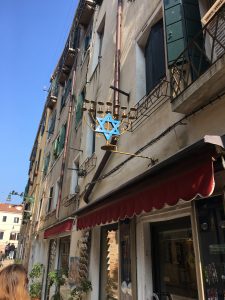 The Star of David. One of the very first things I saw as I stepped into Venice.