When you think of Rome, the first thing that probably comes to your mind is the grand Roman empire, ruthless conquerors and warring gladiators. The Roman Colosseum is the most influential, representative, and important symbol of this era. Formally called the Flavian Amphitheater, it was commissioned in 72 CE by Emperor Vespasian of the Flavian dynasty. After only eight years of construction, it was officially opened by Vespasian’s son Titus in 80 CE. 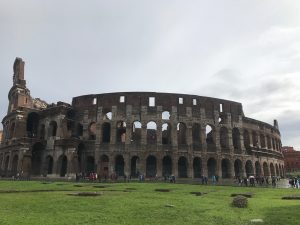 Our very energetic tour guide Marco Misano told us that one theory behind the popular name of Colosseo was a reference to the colossal gilded bronze statue of Nero which stood outside the amphitheater until the 4th century CE. For some reason, the name stuck.

Just outside the Colosseum, where the statue used to stand, is the Arch of Constantine. It was built in 315 CE to mark the victory of Constantine over Maxentius at Pons Milvius.

The Colosseum was a freestanding structure made of stone and concrete, with grandiose marble seating and decorations. It was built with the plunder of the conquest of Jerusalem in 70 CE and primarily built by the Jewish slaves brought back from Jerusalem. 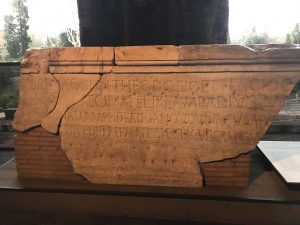 In total, there are around 80 arch entrances and enough room for 55,000 spectators – very similar to the large sport stadiums of today. The architectural style is unique in the sense that each floor had a different column type—the first floor had Doric columns, the second Ionic and the third level Corinthian. Standing at 150 feet with four stories and a width of 615 x 510 feet, this colossal structure dominated the city.

The Colosseum held spectacular gladiator fights to the death, wild animal hunts including lions and bears, and public executions. They also used to hold recreations of large naval battles by flooding the arena but these were not as popular due to the lack of gore and blood the spectators wished to view.

So who exactly were the gladiators? The gladiators were primarily slaves, prisoners of war, condemned criminals and mentally unstable Roman citizens. The winners would earn a large sum of money which they could use to buy their freedom and escape the games. However, some people liked the glory that fighting in the Colosseum brought them and chose to remain in the games.

In 404 CE, with the changing times and tastes, the games of the Colosseum were finally abolished by Emperor Honorius. The Colosseum was largely abandoned after this and then an earthquake in 1231 caused the southwest façade of the Colosseum to fall apart. The top part crumbled and the outer ring of part of it is completely gone. Because this side was constantly exposed to the sun, it made it more susceptible to damage. Fortunately, the rest of the Colosseum still stands.

Fun Fact: In 1749, Pope Benedict XIV actually consecrated the Colosseum in memory of the Christian martyrs who had lost their lives there. But this claim has no real proof and its validity is still largely disputed.

Marco also showed us a Roman coin which had an image of a strong gladiator figure juxtaposed with a poor beggar Jewish woman. This was meant to symbolize the victorious Titus and a personification of Judea. How interesting that not only did they use the Jews’ own treasure from Jerusalem to build the Colosseum, used Jewish manpower but also that the coins of the time reflected Roman victory and Jewish inferiority. 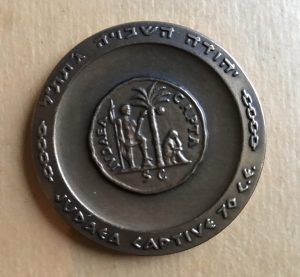 Unfortunately, we don’t have a picture at the top of the Colosseum because it was pouring rain and the violent wind made for unsavory pictures…

After we left the Colosseum, however, the weather decided to stop hounding us and the sky opened up to be a beautiful day. 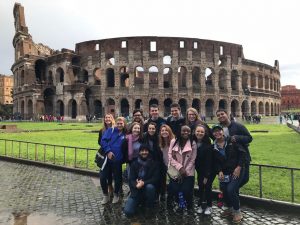 We proceeded to walk through the Roman forum where we were able to see images of how the forum used to look like (thanks to Marcus’ picture book!) and then see how far the buildings have deteriorated in the present day. Its destruction was primarily due to natural disasters as a lot of earthquakes have plagued the city of Rome and also because the church took the marble from the ancient temples to build St. Peter’s Basilica and other religious buildings.

Fortunately, the entrance to the forum –The Arch of Titus—is in pretty good condition save some graffiti on the inside of the arch. This arch is a Roman triumphal arch which was erected by Domitian in 81 CE at the top of Via Sacra (meaning “Sacred Way”) in the Roman Forum. It commemorates the victories of his father Vespasian and brother Titus when the great city of Jerusalem was sacked and plundered in 70 CE. One panel has an image of a menorah, some trumpets, and what seems to be the Ark of the Covenant carried by Roman soldiers. The Jews actually refused to walk under the arch because according to old Roman law, once you did you were no longer considered a Jew. Crazily enough, this ban was only lifted until 1997. 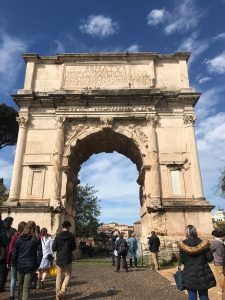 1 thought on “The Jews and the Colosseum : An Ancient Minority in Ancient Rome by Melissa Gerdts”