After a busy morning spent visiting the Colosseum and Forum—Rome’s most famous ancient sites—during the second half of our Monday in Rome we reunited with our guide Marco to tour one of Catholicism’s most important sites—the Vatican. We received our first sight of the dome of St. Peter’s Basilica crossing the Ponte Sant’Angelo, and even from a distance it was hard not to be in awe of the beauty and splendor awaiting us in the Vatican. Although the smallest country in the world, with an area of 0.17 square miles and a population of about 1000, the Vatican City is nonetheless home to some of the most important religious and cultural sites in the world: St. Peter’s Basilica, the Vatican Museums, and, of course, the Sistine Chapel. Despite its size, the Vatican City holds immense power: the Pope is the only absolute monarch in Europe and the country is the seat of the Catholic Church (the largest Christian denomination in the world, with nearly 1.5 billion members). 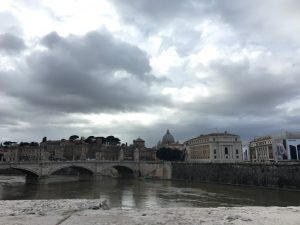 A view of St. Peter’s dome from the Ponte Sant’Angelo

Walking through the streets of Vatican City, it seemed as if every tourist in Rome had decided to visit at the same time as us; the long lines wrapping around the walls of the City and the masses of people in the Museums and Basilica, and gazing up at the frescoes of the Sistine Chapel, were truly a testament to the extreme cultural, historical, and artistic value of the Vatican’s treasures, as well as a reminder of the importance of the Vatican for so many Christians who visit from all over the world.

Our tour of the Vatican began in the Vatican Museums, which contain one of the largest art collections in the world, spanning over 9 miles. While we only saw a small portion of the collection, walking through the Tapestry and Map Rooms, what we did see offered us a glimpse into the extraordinary richness and splendor of the treasures of the Vatican. Before entering the Sistine Chapel, Marco explained to us the history behind the four years it took Michelangelo to paint the chapel. Commissioned of him by Pope Julius II, Michelangelo thought the task was nearly impossible, and resented the pope’s treatment of him. However, unknown to most people both in the sixteenth century and today, Michelangelo painted secret messages in the Sistine Chapel condemning the corrupt Pope and secret symbols that advocate for a reconciliation between Christianity and Judaism.

At first, the idea of secret signs and messages in the paintings sounded like something out of The Da Vinci Code. However, with the help of our guide we could see these hidden symbols and messages with our very own eyes. Most significantly, Michelangelo painted only scenes from the Old Testament. He did this on purpose; at a time when the Pope was afraid that people would read the Old Testament and want to convert to Judaism, Michelangelo wanted Jews and Christians, and the Old and New Testament, to be connected. Looking closer at the individual paintings, you can see that Jesus is painted with all five fingers showing (representing the Five Books of Moses) rather than only three (which would represent the Holy Trinity); the side of the Chapel depicting the story of Moses is painted from right to left, like Hebrew; two Jewish figures (distinguishable by their yellow and pointed hats) make up the central group of figures surrounding Christ in The Last Judgment, indicating their place in Paradise; and, also, in the panel depicting the Fall of Adam and Eve, the forbidden fruit is depicted as a fig, in the Jewish tradition, rather than as an apple. Furthermore, The Sistine Chapel itself was designed to match the proportions of Solomon’s Temple as described in the Old Testament. 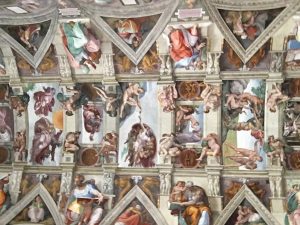 A furtively taken picture of the Sistine Chapel ceiling 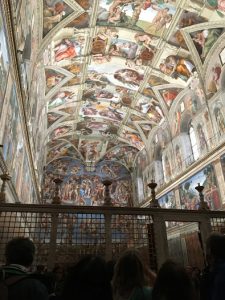 The Last Judgment can be seen on the back altar wall

Michelangelo painted the ceiling of the Sistine Chapel between 1508 and 1512, forty years before the establishment of the Roman Jewish Ghetto in 1555. His hope for reconciliation between Christians and Jews went unfulfilled in his lifetime, and for a long while afterwards. During World War II, Pope Pius XII remained outwardly silent amidst the Nazi’s genocidal agenda and the deportation of thousands of Jews from Rome and around Italy. It was not until 1960 when the Vatican, led by Pope John XXIII, finally declared that the Romans, and not the Jews, were the ones that killed Christ. Both of these facts are stark reminders of the long and complex history of the (mis)treatment of the Jews by the Catholic Church.

Our tour of the Vatican ended inside the breathtaking St. Peter’s Basilica, where we saw Michelangelo’s stunningly beautiful Pietà and the massive dome of the Basilica, also designed by Michelangelo, the tallest in the world. Even in here could be found a connection to Judaism: the columns of the central altar of the Basilica were in fact modeled on the ones in the Temple of Jerusalem. Outside, we watched the changing of the Swiss Guards in front of the Basilica and took pictures in St. Peter’s Square, including a cheesy, but cute, one of us standing in the two countries—Italy and Vatican City—at once. As the sun began to set, we headed out to round off our day with the Pantheon, dinner, and gelato. 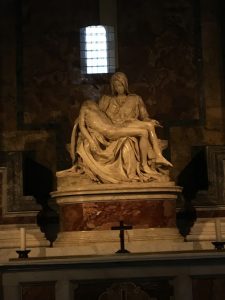 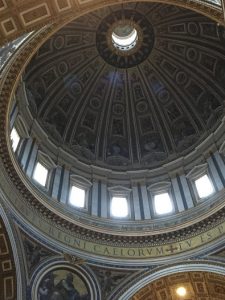 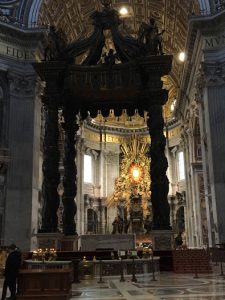 The altar in St. Peter’s Basilica, with columns modeled after those in the Temple of Jerusalem

After our day at the Vatican, I reflected not only on the significance of the art masterpieces I had just seen, but also on the unique nature of the Vatican’s connection to Judaism. With so many people traveling to visit the Vatican each day, and as the head of the largest Christian denomination in the world, the Vatican and the Pope have an immense responsibility to not only preserve the beautiful art found in the country, but to also represent truthfully to all visitors the complex and deep connection between Christianity and Judaism that is undeniably a part of the Vatican’s history. In these responsibilities also lies a duty to guide the followers of Catholicism toward tolerance and acceptance of other faiths and belief systems. Our Jewish tour of the Vatican was an incredibly powerful attestation of the connectedness of the Jewish and Christian religions, as well as a monumental reminder of the importance of the continuance of the reconciliation between the people of these two religions. 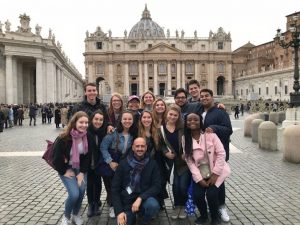 1 thought on “The Jewish Vatican by Julia Ryskamp”