We began our first full day in Rome with a tour of the Jewish ghetto. Our tour guide was Yael, a magnificent woman and proud Roman Jew (one of 13,000 in Rome today). To begin our tour, Yael described the physical space of the Jewish ghetto in Rome and how it has changed from its creation in 1555 to today. When the ghetto was established by Pope Paul IV in July of 1555, it consisted of only two streets and four blocks and was gated at night. This cramped area forced the buildings in the ghetto to be built much higher (often seven to eight floors) than the buildings in the rest of Rome—only worsening the already terrible living conditions by blocking out the sunlight. Outside of every gate was a Christian church, likely displaying a sign written in Hebrew in an effort to convince the Jewish community to convert to Christianity. The Jewish ghetto continued to be enforced by every following pope, officially ending in 1870, when Rome joined the recently united Kingdom of Italy. 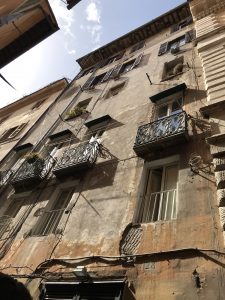 An example of how high the buildings in the Ghetto could be.

As we walked through the streets, Yael made various stops to point out important areas, doors, and plaques remembering the deportation of over 2,000 Jews from Rome in October of 1943. In September of 1943, the Nazis had given the Jewish community 36 hours to pay over 50 kilograms of gold to remain in Rome. They actually managed to collect the gold, but their efforts did nothing more than create a false sense of security within the community. As Nazis took the Jews from their homes, they furthered this false security by instructing them to lock their doors and bring their keys with them. This order made it less likely that they would run, since it seemed as if they would be returning home in the near future. These written orders, along with the receipts issued to those who contributed to the 50 kilograms of gold, can be found in the Jewish Museum in Rome. 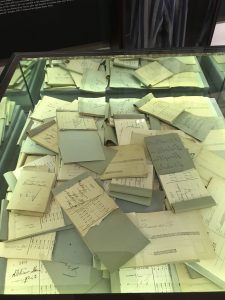 Receipts issued to the members of the Jewish community that contributed to the 50 kilograms of gold, in hopes of avoiding deportation. 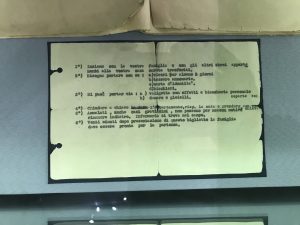 The instructions given to Jewish people as they were being deported, fostering a false sense of security.

Objects commemorating the lives lost can be found not only in the Jewish Museum, but also scattered throughout the rest of the city. It was during this tour that we were first introduced to the stolperteine (stumbling stones) that are located all throughout Europe. These “stones” are Rome’s smallest, but incredibly meaningful, monuments to remember the victims of the Holocaust. They are small golden squares nestled into the cobblestones and are normally located in front of the individual’s residence, but are also occasionally found in front of their workplace. The stones give the person’s name, birth year, the day they were deported, the camp they were deported to (often Auschwitz), and the date of their death. Gunter Demning, the artist behind the stolpersteine, sought to give a name back to the Holocaust victims that are too often reduced to a mere number. As our trip went on, we continued to point out the small stones throughout Rome, Venice, and Trieste. 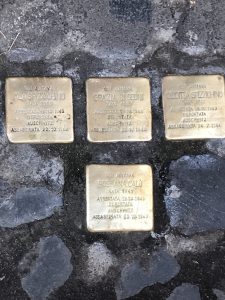 Stolpersteine outside of an apartment building in the Jewish Ghetto.

Our first day was also full of learning about the history of Rome’s synagogues. During the period of the Ghetto, nearly all of the synagogues were closed down (another effort by the Papal state to convert Rome’s Jews). However, the synagogue known as the Cinque Scole managed to survive. This synagogue got its name from the fact that while it was only one building, it was home to five different “schools” of Jewish practices, such as the Scola Nuova and the Scola Siciliana. Yael showed us around the part of the museum with treasures from the Cinque Scole, taking time to point out the ornate Torah crowns (keter) and precious fabrics for covering the Torah. Jews weren’t allowed to own property, so they used their money to donate elaborate objects to their synagogues, often as a status symbol or a way to remember deceased family members. 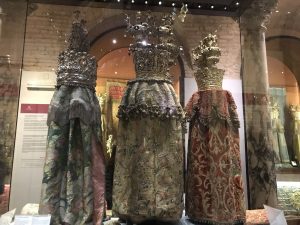 A few of the Torah crowns and covers in the Jewish Museum.

We ended our tour of the Jewish Ghetto with Yael by visiting the Tempio Maggiore, or Great Synagogue. The synagogue is certainly deserving of its name; it’s the largest of all of the synagogues in Rome today and stands out in the city through its eclectic style and square dome (the only one in the city). Once one enters inside, it is impossible to not be blown away by its breathtaking beauty. Additionally, if you’re as lucky (and willing) as we were, you may be able to crash a 25th Anniversary ceremony in this beautiful space! The synagogue was built from 1901-1904, after the destruction of the Cinque Scole in 1893. The construction was funded by the members of the Jewish community and today, it still overlooks the old Jewish Ghetto. The Great Synagogue serves both as a remembrance of centuries of oppression and confinement and a celebration of their freedom. 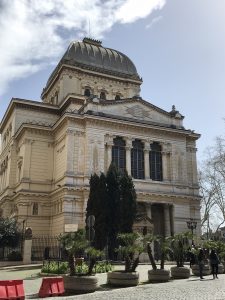 Il Tempio Maggiore (The Great Synagogue) from the outside. 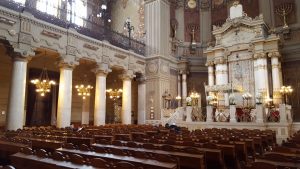 Inside of the Great Synagogue.

The Great Synagogue sits on the eastern bank of the Tiber river and as we walked along its edge, I couldn’t help getting lost in my thoughts. The Tiber river suddenly represented so much all at once. It was no longer solely the river that flows under the beautiful Ponte Sant’Angelo, one of my favorite spots in Rome in the late evening (once most of the tourists have dissipated). It was no longer a seemingly fictional setting where Useppe and Bella went to play and dream in La Storia. Now, after our tour, it was impossible to see it without remembering its purpose as a natural gate and enemy for the population of Rome’s Jewish Ghetto. I found that this intermingling and clashing of roles and identities continued to resurface throughout our trip, whether it was in terms of the characters from our readings or the dark history of an often overly-romanticized Italy.

1 thought on “Jewish Italy: The One Where We Crash a 25th Anniversary Ceremony by Tiffany de Guzman”