The second half of March 13th started after lunch at Da Bucatino, on via Luca Della Robbia. Specifically, this homely restaurant is in Rome’s Testaccio Quarter, famous for its artificial mountain made from amphorae, special jugs used as vessels for transport in the port that was located on the other side of Porta San Paolo. It was in this popular quarter that Elsa Morante lived for part of her life, and where Ida Ramundo and Useppe lived during the second half of La Storia.

In 1944, after the German Occupation of Rome, Ida moves from her stuffy refuge in Pietralata to Testaccio. Part of her stay in Testaccio is with the Marrocco Family on Via Matro Giorgio, where she rents a room from a family waiting for their men to return from the war. Eventually, in 1946, Ida finds her own apartment on via Bodoni, which actually intersects via Luca Della Robbia. In Testaccio, Ida is close to where she teaches classes, and is able to leace Useppe at home with Bella, under the surveillance of the concierge’s niece, Lena-Lena.

During a scene in the book, Ida walks to the ghetto in a stupor, while confronting very strong feelings of anxiety as she walks through the empty houses that belonged to the Jews of Rome, alongside the horrible realization that she may never see any of them again. The distance between her home in Testaccio and the Roman Ghetto in Trastevere is actually somewhat short, and in reality, is not much longer than a fifteen minute walk. 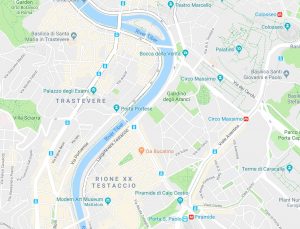 A Google Maps Screenshot demonstrating the short distance between Testaccio and Trastevere.

Not far from Testaccio is the Protestant Cemetery of Rome, easily spotted due to the Pyramid of Gaius Cestius, which makes up its southern border. Established in 1716, the cemetery is also known as The Non-Catholic Cemetery for Foreigners in Testaccio. According the the cemetery’s website, it is home to more than 50 nationalities and religions, with tomb inscriptions in over 15 languages. There are three major qualifications for burial in the cemetery- you must be non-Catholic, non-Italian, and a resident of Italy. 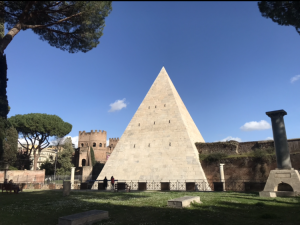 The pyramid of Gaius Cestius, along with the Aurelian Walls (added in 217 AD), that make the southern boundary of the cemetary. The cemetery is now considered a national cultural zone in Italy.

Our tour guide was Nicholas Stanley-Price, author of The Non-Catholic Cementery in Rome: Its History, People, and Its Survival for 300 Years, who noted not only the age and continuous use of the cementery, but also how it contains a high number of famous and important graves, such as John Keats, Percy Bysshe Shelley, Edward Trelawny, Antonio Gramsci, and many others. The cemetery has seen multiple threats to its continuous use by almost becoming a portion of the city during the industrial revolution and again through Mussolini wanting to replace it with roads, much like with Circus Maximus.

The cemetery itself was founded due to how laws of the Catholic Church prevented the burial of Protestants (and anyone non-Catholic) in Catholic Churches and consecrated ground. However, due to the amount of foreigners throughout Italian history, many non-Catholic cemeteries began to appear. Specifically, Pope Clement XI granted a group of exiled protestants from the Stuart Court to be buried in front of the pyramid, now dubbed “the old cemetery”. Eventually, so as to not obstruct the view of the pyramid, the area surrounding the pyramid became closed off for burial and new trees and so the cemetery was expanded. 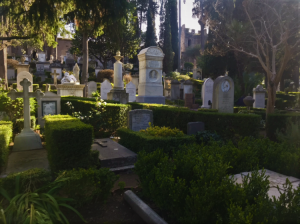 The new part of the cementary, as seen from the entrance, featuring the abundant trees and peaceful greenery, alongside a variety of elaborate tombstones.

A quick glance around the old portion of cemetery will prove that there are relatively few, if any, Jewish tombstones there. During the time of the old cemetery, there was actually a separate Jewish cemetery in Rome, leading to a much different burial experience than that from the Jewish Catacombs. From a quick online search, I can only guess that it is Campo Verano, a cemetery founded in the early 19th century, divided into a Jewish cemetery, a Catholic cemetery, and a WWI monument (most likely those from the bombing of San Lorenzo). However, according to Cimiteri Capitolini, the remains of a Roman Necropolis known as the Catacombs of Santa Ciriaca, render the burial grounds to be at least two thousand years old. The Flaminio Cemetery, constructed in the 1940s, also seems to have a wide variety of religions and nationalities. 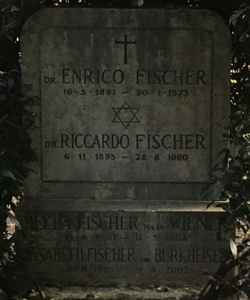 One of the Jewish tombstones found in the new portion of Non-Catholic Cemetery. Unfortunately, the cemetery’s database does not have a search function for specific religions.

Curious about the number of Jewish tombstones that I noticed in the Non-Catholic cemetery, I decided to look into the traditions for a Jewish funeral or burial. According to chabad.org, a will must leave specific instructions detailing the circumstances of a funeral and burial: washing and purification of the body (Tahara), a set of traditional shrouds, a kosher casket, and care of the Chevra Kaddisha (Tacrichim), and also, someone to keep watch over the body (Shomer). It is also noted that cremation is forbidden and that the body must be buried under 24 hours, with certain exceptions.

A map of Rome’s Non-Catholic Cemetery, demonstrating it’s size. Note that the far left is the old part of the cemetery, featuring the pyramid. The cemetery then expanded to the right in the 1850s and 1890s.

Through my visit of Testaccio and Trastevere, alongside the Non-Catholic cemetery, I began to realize how widespread Jewish history is in Rome. From the writings of Elsa Morante about entire sections of Rome, to the difficulties associated with burying Jewish within a Catholic country, to the location and civil planning of the Roman Ghetto, I began to discover more and more about the oldest minority. Through our Jewish Italy course, I’ve noticed that many Jewish Italian authors are also some of the most popular authors in Italy. However, visiting the locations that these authors have written about, visiting the historic places where they lived, has added a depth to their literature that I would not have gained otherwise.

1 thought on “From Testaccio to Trastevere, and Beyond! by Uriel Salazar”