After a morning in the Jewish Ghetto of Rome, we made our way to the Jewish Catacombs. Here, we would be reunited with our guide from the morning, Yael and another tour guide. My taxi was the first to arrive and immediately we were taken by the spooky nature of the Catacombs. It almost seemed as if we were in the wrong place because there was no one else in sight. The caretaker arrived soon thereafter, a cantankerous man named Alberto who refused to tell us his last name. His presence fit with the ominous nature of the Catacombs. Eventually, the entire group arrived and Alberto gave us a waiver to sign along with some flashlights to guide the way once we were inside. Yael had warned us about the complete darkness and the presence of jumping crickets. A large number of us were frightened to say the least. Thus, we were divided into two groups and mine was the first to enter. 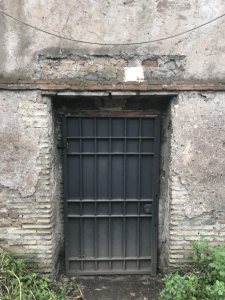 The ominous entrance to the catacombs.

Once inside, we learned a lot about the purpose and history of the Jewish catacombs. We were being treated to a very special tour of something that most people are not allowed to see. The catacombs are the most obvious evidence of Jewish presence in Rome. Jewish people were buried in shelves. It was not kosher to put the bodies in coffins, so the proper way to bury the dead was to place them in these shelves and covered with dirt and mud. This made it easy for bodies to resurface as the covering would disintegrate, meaning they were constantly reburied to remain hidden. 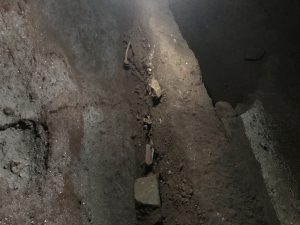 One of the burial shelves, where body parts have resurfaced. This is not uncommon to find in the catacombs.

In the catacombs, there were many rooms on either side of the infrastructure. These signified whole families who were buried together. In these rooms, there were inscriptions in Greek that signified the family name and who was buried where. Along with these inscriptions were elements of Jewishness, including Menorahs drawn around the room. The presence of the color red was also prevalent, chosen to make the tombs very particular. 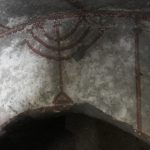 The presence of the menorah can be found throughout the rooms in the catacombs, displayed in the prevalent red coloring. 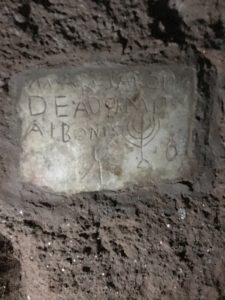 One of the many plaques with Greek inscription signifying information about who was buried where.

The dimensions of a tomb changed based on whether a person was big or small. While in the catacombs, we saw a tomb of a baby who had passed away. It wasn’t uncommon for children to die young and be buried. Yael informed us that a larger room dedicated to one family signified a wealthier family, who was connected to Roman society in some way. Towards the end, we saw a room that had once been adorned in Pagan icons and idols but was reclaimed and used as a Jewish tomb for a wealthy family. 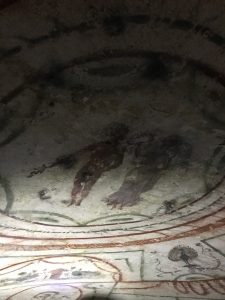 The pagan adornments of the large tomb. The Jewish family reclaimed this space and made it their burial room.

Further into the catacombs, we examined a Coquim, which was a tomb that was perpendicular to the wall. This signified a more “Oriental” way of burying people. Multiple people would be buried in this style of tomb. Near this tomb, we saw the skull from a body where the covering had again disintegrated. 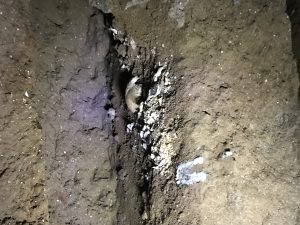 The body parts of a Jewish person whose body had become uncovered. If you look closely, you can see the top of a skull.

Along the way, we were greeted by black crickets that had the ability to jump. They looked like spiders from far away, but they only had six legs. We were all terrified by the creatures and more than once, hustled our way through the narrow halls of the catacombs. It was a fright to say the least. As we neared the end of the catacombs, we noticed how many of the stone inscriptions featured various images. Yael told us that these signified the jobs that each member did when they were alive. For example, one featured a cow, telling us the person was a butcher in their life. 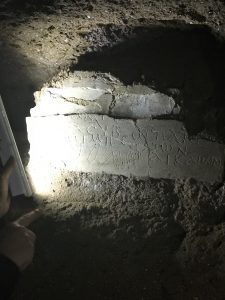 The image of the cow signified the job that the person buried here did when they were alive.

In order to exit the catacomb, we had to travel the same path backwards. There was only one entrance and exit. Once we reached the entrance again, the caretaker stopped to show us a well in one of the rooms at the front of the catacomb. It was used to hide bones. Many would use it to search for jewelry and valuable items. However, this proved to be fruitless as Jewish people were not buried with material things of value. 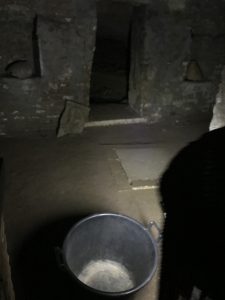 The well that was used to sift through bones for valuable items. The well is now covered, as you can see in the picture.

My group exited the catacombs about 30 minutes before the second group, so we waited outside as it rained. This only added to the mysterious atmosphere of the catacombs. After everyone was out, we took a group photo to remember this unique experience. It was definitely something that I never would do alone, but with a group, it was quite an adventure. We said our goodbyes to Alberto and the catacombs in the pouring rain and waited for our taxis to take us back to the light of our hotel. 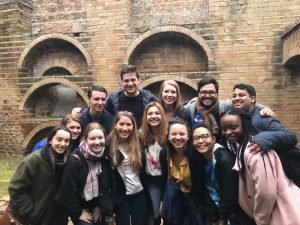 Our group, glad to be out of the darkness and away from the crickets but not disregarding this unique experience.

1 thought on “Crickets, Darkness and Tombs, Oh My: Exploration of The Jewish Catacombs by Naveen Hrishikesh”